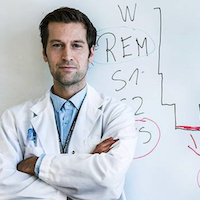 A rough night of sleep could have ripple effects that lead to an increased risk of Alzheimer disease.

Plasma levels of total tau (t-tau), Aβ40, Aβ42, neurofilament light chain (NfL), and glial fibrillary acidic protein (GFAP) were assessed using ultrasensitive single molecule array assays or ELISAs, in the fasted state in the evening prior to, and in the morning after, each intervention.

“Our exploratory study suggests that acute sleep loss results in increased blood levels of t-tau,” the authors wrote. “These changes provide further evidence that sleep loss may have detrimental effects on brain health even in younger individuals.”

The investigators believe larger cohorts are warranted to delineate sleep compared with circadian mechanisms, implications for long-term recurrent conditions, as well as interactions with other lifestyle and genetic factors.

Sleep duration could also help forecast psychiatric disorders for school-aged children, according to a new study.

The participants were followed up biennially from 4-12 years old and the data was analyzed in 2019.

Sleep duration was assessed with 1 week of continuous use of triaxial accelerometer.