New research from an analysis of the Rush MAP is examining associations between FGCRS and cognitive decline later in life.

Using data from more than 1500 dementia-free patients followed for over 20 years, an international team of investigators found a greater cardiovascular risk could predict greater risk of neurodegeneration as well as declines in episodic memory, working memory, and perceptual speed.

"In the absence of effective treatments for dementia, we need to monitor and control cardiovascular risk burden as a way to maintain patient's cognitive health as they age," Weili Xu, PhD, Department of Epidemiology and Biostatistics, School of Public Health, Tianjin Medical University, Tianjin, China, said in a statement from the American College of Cardiology. “Given the progressive increase in the number of dementia cases worldwide, our findings have both clinical and public health relevance."

In an effort to assess the impact of cardiovascular risk burden on cognitive health and brain structure, Xu and investigators from Sweden, Amsterdam, and Rush University in Chicago designed the current study using data from the Rush Memory and Aging Project. From the ongoing project, investigators identified a cohort of 1588 dementia-free patients who underwent multiple tests and assessments related to cognitive and overall health for inclusion in their analysis.

Patients enrolled in the Rush MAP were assessed through a series of tests at baseline and subsequent follow-up visits, which investigators used to create composite scores for domains such as episodic memory, working memory, visuospatial ability, semantic memory, and perceptual speed. Investigators calculated the FGCRS for each patient based on age, sex, smoking, systolic blood pressure, medication for hypertension, total cholesterol, HDL cholesterol, and diabetes.

A diagnosis of dementia or mild cognitive impairment (MCI) was determined through a procedure including scores of cognitive tests, a clinical judgment by a neuropsychologist, and a diagnosis made by a clinician. Of note, investigators began inviting 409 patients to undergo MRI beginning in 2009—MRI data from a 378-patient subsample was used in the current analysis.

For the purpose of the analysis, Xu and colleagues divided the 1588 patients into tertiles based upon their FGCRS—with 454, 475, and 658 patients in the lowest, middle, and highest turtles of FGCRS, respectively. Investigators noted FGCRS ranged from 4-28 among all study participants with a mean score of 15.6±3.7.

In a related editorial, Costantino Iadecola, MD, of the Feil Family Brain and Mind Research Institute at Weill Cornell Medicine, highlights the belief examining use of cardiovascular risk scores to assess cognitive decline is worth further exploration.

"The results of this study suggest a useful tool for assessing dementia risk and support recommendations to aggressively manage cardiovascular risk factors in midlife," Iadecola wrote.

This study, “Associations Between Cardiovascular Risk, Structural Brain Changes, and Cognitive Decline,” was published in the Journal of the American College of Cardiology. 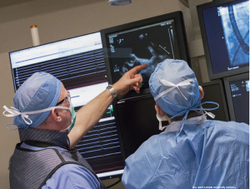