A recent study investigated the relationship between neutrophil and renal impairment in patients with rheumatoid arthritis (RA).

Investigators, led by Cong‐Qiu Chu, MD, PhD, Oregon Health & Science University, found that neutrophils greater than 7.5 x 109 was associated with a high risk of renal impairment in patients with RA.

Investigators conducted a cross-sectional study to investigate the relationship between neutrophils and renal impairment in patients with RA.

The team used data from 685 patients who met the classification criteria for RA between September 2018 – September 2019 at the First Affiliated Hospital of Guangzhou University of Chinese Medicine.

Patients were ≥18 years of age and excluded for lack of critical data, less than 18 years old, had malignant tumor, active infection, and serious blood disease, and eGFR <15 ml/min/1.73m2.

A total of 602 patients with RA were included in the study. Data on general demographics including sex, age, durations, current alcohol, cigarette use, and medication history (steroids, bDMARDs, and NSAIDs).

The main outcome for the study was eGFR, with patients having eGFR<60 ml/min 1.73m2. identified as having renal impairment regardless of kidney markers.

The team used multivariable logistic regression analysis to evaluate the association between neutrophils and renal impairment in patients with RA.

The team concluded that a neutrophil count greater than 7.5 x 109/L was associated with increased risk of renal damage in RA patients, as well as UA > 360 μmol/L and hemoglobin less than 120 g/L.

“Although more prospective studies are needed to verify our results, based on the above data. we believe that continuous monitoring of neutrophils in RA patients is necessary and it could be used for early detection and identification of changes in eGFR, allowing doctors to treat patients with potential kidney damage promptly,” investigators wrote.

The study, “Association between neutrophils and renal impairment of rheumatoid arthritis: A retrospective cross-sectional study,” was published online in Immunity, Inflammation and Disease. 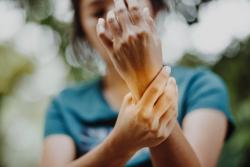