In an interview, lead investigator and expert Dr. Martin Kolb discusses his new phase 2b HZN-825 trial and what it's like treating the rare disease.

In January, Horizon therapeutics announced that a phase 2b clinical trial has enrolled its first patient. The study's objective is to evaluate the development-stage medicine HZN-825 for treating patients with the rare condition, idiopathic pulmonary fibrosis (IPF), which is the most common interstitial lung disease.

Lead investigator, Martin Kolb, MD, PhD, McMaster University, shared his expertise on the subject in an interview with HCPLive®. He discussed the HZN-825 trial, other IPF medications, and how people with IPF deserve better treatment options than they have.

"One of the reasons why it's so important is that its prognosis is pretty dismal," he said. "So, it's worse than most of the cancers that most people know about. A 50% mortality is to be expected within like 3 to 4 years after diagnosis."

Idiopathic pulmonary fibrosis is a progressive condition associated with inflammation and scarring in the respiratory organ. The US sees approximately 30,000-40,000 new cases per year, with an estimated total of 100,000 Americans living with the disease.

The medicine in development, HZN-825, is a lysophosphatidic acid receptor 1 (LPAR1) antagonist designed to treat these patients. Preclinical and clinical evidence support the antifibrotic potential of LPAR1 antagonism across multiple organ systems, including lung and skin.

The primary endpoint of the study is change in forced vital capacity (FVC) after 52 weeks. Investigators are planning to enroll approximately 360 patients in order to randomize them in a 1:1:1 ratio to receive 300 mg of HZN-825 once daily, twice daily, or placebo.

Kolb is the Director of the Division of Respirology and a Professor and Research Director in the Department of Medicine at McMaster University. Kolb is the inaugural Jack Gauldie Boehringer Ingelheim Chair in Interstitial Lung Disease (ILD) and the Editor in Chief of European Respiratory Journal. In additon, he practices as a pulmonmary physician at Firestone Institute for Respiratory Health, St. Joseph’s Healthcare.

Follow the Rare Disease Report to hear more from Kolb about IPF on our monthly podcast. 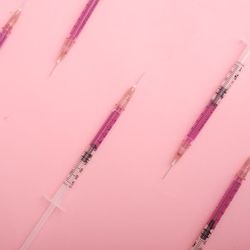