Dr. Mulshine details the how low-dose CT scanning can result in “exquisite resolution” of structures in the lung in patients with lung cancer and smoking-related diseases.

Earlier this month, James Mulshine, MD, Professor of Internal Medicine and Associate Director at the Institute of Translation Medicine at Rush University, was welcomed on the Lungcast Podcast to speak on recent developments in low-dose CT screening, as well as how these screening could be used for detecting non-cancer diseases.

The conversation, which was held by Lungcast host and ALA Chief Medical OfficerAl Rizzo, MD, was done in recognition of Lung Cancer Awareness Month.

In an earlier segment, Mulshine spoke to Rizzo of the history of CT screening through a series of landmark studies including the National Lung Screening Trial (NLST), which was initiated nearly 20 years ago.

Since then, CT screening, which utilizes a “very modest level of radiation”, has undergone a series of changes.

“The capability of the detectors that are now used in routine clinical, CT scanners is exquisite, and we have computers that can work fast enough to form these images and to segregate these images in ways that is useful to the clinician, and in a way that's inconceivable just 20 years ago,” Mulshine said.

Though CT screening is utilized in efforts of early detection of lung cancer in patients, a series of findings had suggested that they could also be used for early detection of other diseases such as coronary artery disease and chronic obstructive pulmonary disease (COPD).

Mulshine referenced an editorial he and Rizzo collaborated on which spoke of screenings taken from the International Early Lung Cancer Action Program (I-ELCAP) that detected evidence of emphysema.

Roughly 24% patients in the I-ELCAP screenings had evidence of moderate-to-severe emphysema, with a majority of them not knowing they had the condition.

“The tip of clinically evident COPD (and) emphysema is a very small fraction of the totality of the disease,” Mulshine said. “And now in the course of lung cancer screening, we can find, 20 times as much evidence as COPD as we can of lung cancer, and we're finding it early.”

To hear more from Dr. Mulshine about the “enormous potential” that CT screening has on informing patients health, as well as the equitability and sustainability of CT screening, watch the video above.

Listen to the full Lungcast episode below. 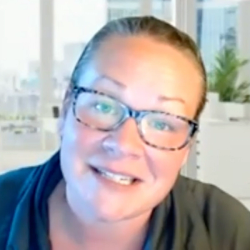 Why Many Smokers Fail to Quit on Their First Attempt