Results of a pilot study examining the impact of time-restricted eating in patients with metabolic syndrome suggest the novel approach could help patients lose weight and improve their symptoms without changes in physical activity.

The 12-week, single-arm study found restricting the daily eating window to a 10-hour period resulted in weight loss and reductions in both systolic and diastolic blood pressure, total cholesterol, LDL-C, and non-HDL-C—highlighting the approach’s potential for treatment of metabolic syndrome.

"As a preventive cardiologist, I try to work with my patients and encourage them to make lifestyle changes, but it is very hard to get them to make lasting and meaningful changes," said investigator Pam Taub, MD, cardiologist and Associate Professor of Medicine at the University of California San Diego School of Medicine in a press release.

The investigators’ study required all participants to restrict their dietary intake to a 10-hour window for 12 weeks and track their caloric intake via an app for the duration of the study. All patients included in the study had baseline eating intervals of 14 hours or more per day and 3 or more symptoms of metabolic syndrome.

Of the 19 included in the analyses, the mean age was 59 (11.14) years, 63% were non-Hispanic white, and 13 were male. The mean BMI of patients included was 33.06, 12 had a fasting glucose level of 100 mg/dL or greater and/or elevated HbA1c of 5.7% or greater at baseline. Additionally, investigators pointed out 79% of patients were on a statin and 63% were taking antihypertensive medication.

At the conclusion of the study, restriction to a 10-hour eating window resulted in reductions in body weight (3.30 ± 3.20 kg (-3%), P=0.00028) from baseline, which translated to significant reduction in BMI (1.09 ± 0.97 kg/m2 (3%), P= 0.00011). Investigators pointed out the reduction in weight in the study is similar to those of other studies examining the impact of calorie restriction with exercise with glucose intolerance.

Investigators noted multiple limitations in their study including the limited size and varying baseline values between participants. Investigators also included the potential influence of the app on dietary habits and pharmacotherapy on overall outcomes as other limitations of the study.

"We have found that combining time-restricted eating with medications can give metabolic syndrome patients the ability to better manage their disease," said study investigator Satchin Panda, MD, professor at the Salk Institute Regulatory Biology Laboratory. "Unlike counting calories, time-restricted eating is a simple dietary intervention to incorporate, and we found that participants were able to keep the eating schedule."

A press release noted study investigators have begun a randomized, controlled trial funded by the National Institute of Diabetes and Digestive and Kidney Disease to further evaluate the impact of time-restricted eating in people with metabolic syndrome. The new study has an enrollment goal of more than 100 participants, will include multiple arms, and examine effects on changes in liver function. 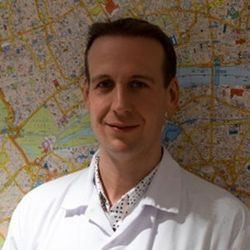