Antithrombosis in Patients with COVID-19 - Episode 1

Transcript: Gregory Piazza, MD, MS: A really major area of focus, at least in the last few weeks, has been the cardiac injury that we see in hospitalized patients with COVID-19 [coronavirus disease 2019]. Alex, you’ve been very busy, not just taking care of patients but also collecting data on the different types of complications that patients experience when they have a COVID-19 infection. Can you tell us a little about what you know regarding cardiac injury? I can speak to that a bit myself. There’s a lot of thought about how blood clotting begins to predispose to some of these cardiac injuries. Maybe you could tell us about how COVID-19 affects clotting.

Alex Spyropoulos, MD, FACP, FCCP, FRCPC: Much like Vic, I really want to give a shout-out to my younger faculty members who’ve put in the huge amount of work on the frontlines and have done the yeoman’s work of taking care of these patients. We’ve had a huge influx in our system at Northwell Health. The numbers are what I call wartime numbers. We have seen 100,000 patients and a few thousand patients—up to 3000—at once in our health system, and about a third of those are intubated. There are tremendous numbers with this. We’re actually gaining a good sense with respect to the cardiovascular and thromboembolic complications in this COVID-19 population.

Much like you all, we’re starting a registry to better assess how and when these complications appear. The first thing that I can tell you, looking at the literature and our own population, is the risk of thrombosis is about 3- to 6-fold higher than what we would expect in the hospitalized population, specifically in the critically ill population that Vic was talking about. This appears to be a highly thrombogenic disease. What’s interesting is that we really don’t know specifics of the coagulopathy. Indeed, there are aspects of DIC [disseminated intravascular coagulation], but it’s not quite behaving as a consumptive coagulopathy. The D-dimer levels are very elevated, but the platelet counts tend to be normal or near normal. The coagulation parameters, the PT [prothrombin time], tends to be normal as well. Fibrinogen levels also tend to be normal or slightly elevated. It’s not a classic consumptive coagulopathic picture.

However, as Vic pointed out, we’ve seen some of the early autopsy data, and patients are dying from massive thrombotic events—such as MI [myocardial infarction], saddle pulmonary emboli in the lungs, and things like stroke—but also a quite consistent pattern of microemboli, specifically in the lungs. One of the purported mechanisms may be this hyperinflammatory reaction, probably cytokine related. An immense release of these inflammatory factors creates a cytokine storm that folks have described, and patients become hypoxic, much out of proportion to what is seen in the regular exams. This hypoxia is leading to a microvascular hypoxemic process and maybe some right heart strain and other aspects.

There’s another school of thought that talks about the oxygen stress, especially at the level of the red blood cell, that may be adding to this. This could be multifactorial. Coagulopathy, yes. Fibrinogen levels, AT [antithrombin] III levels, and factor VIII levels are all affected, but there is evidence of a severe hyperinflammatory response.

In terms of the incidence of disease, you can probably address the cardiac issues better than I. We’ve seen classic acute coronary syndromes, but also things like myocarditis in these patients. On the venous thromboembolic side, there are some studies that suggest a prevalence of anywhere from 20% without screening to as high as 40% with routine lower-extremity screening, which is about 3 to 6 times higher than what we would expect. There is a very high prevalence of venous thromboembolic events in this population. What’s unusual is an apparently high prevalence of in situ pulmonary embolic events in the absence of lower-extremity DVT [deep vein thrombosis]. There are some very interesting things about this disease.

Gregory Piazza, MD, MS: From the cardiovascular system standpoint, as you mentioned, it’s not just the patients presenting with heart attacks. There are patients typically presenting with non—ST-elevation myocardial infarction, but we are seeing some ST-elevation myocardial infarction. Myocarditis seems to be relatively common in these patients, either through a direct effect on the cardiac myocytes or because of some other factor. Heart failure has been seen. There have been reports of new atrial fibrillation in patients who otherwise haven’t had it. There are other types of arrhythmias and sudden cardiac death. All 3 of us are in the camp where we think a lot of these cases are probably massive PEs [pulmonary embolisms], but there have also been arrhythmic deaths. From the coagulation point of view, there is a lot of catheter thrombosis. I don’t know if you have been seeing that, but that’s been a big complaint at my center: clotting of dialysis catheters or central lines.

Alex Spyropoulos, MD, FACP, FCCP, FRCPC: Absolutely. At Northwell Health, I’m getting a lot of feedback from my renal disease colleagues. Renal replacement devices, dialysis catheter-based therapies, ECMO [extracorporeal membrane oxygenation] devices—these are all clotting through standard anticoagulant regimens. In our particular institution, we’re advocating for the use of alternative parenteral anticoagulant modalities, such as intravenous argatroban, for example. We’re using that more and more. We’re potentially moving away from the PTT [partial thromboplastin time] method to an anti—Xa method of monitoring on fractionated heparin.

Antithrombosis in Patients with COVID-19 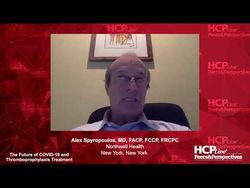 The Future of COVID-19 and Thromboprophylaxis Treatment 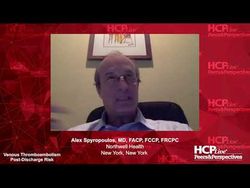 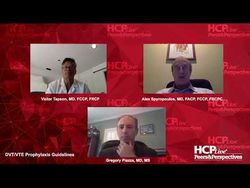