By stabilizing the TTR [transthyretin] gene silencers and by adding a GalNac atenilation, so basically better targeting a delivery to the liver. The agents—patisiran and inotersen—now are potentially transformed into ones that can be given less frequently and at a much lower dose because the milligram potency is heightened. I’d like to hear from the 3 of you which of these agents you’re most excited about or whether you think that the technology is moving ahead so well that there will be multiple agents to choose from. Dr Desai.

Akshay S. Desai, MD, MPH: Well, I think in general, I’m quite optimistic about the range of options that we’re likely to have in the near term for management of patients. I think that the silencers are very far ahead in development programs, and I think we’re likely to see broadened application of the silencers in some of the newer formulations that you’ve talked about soon. And so I’m quite optimistic based on the data that Ron’s excited about of the effects in the cardiomyopathy subpopulation of APOLLO—that those will be very useful agents moving forward, particularly if the formulations are such that we can administer them less frequently and more conveniently for patients.

I must confess that some of the very new agents, the next-generation agents, the AG10 Eidos and others, are trials that I’m not personally involved with. So, I’ll look to the others in the group to make comments about those specific agents, although I think we’ll soon have a range of options to consider for these patients.

Mazen Hanna, MD: Yeah, I’m very excited about the next-generation silencers. You know the vutrisiran that you mentioned in the HELIOS-B study was given subcutaneously every 3 months, so we’re talking about only 4 shots a year. That will be a game changer as far as patient convenience and, again, the dose is significantly less than patisiran. And the inotersen modified version which has a GalNAc and change in the backbone, that was also given monthly. So, it’s still much better than weekly. And at a much dramatically lower dose, so those thrombocytopenia and renal issues were felt to be dose related. And now that you can use a lower dose specifically targeted to the liver with the new inotersen agent, I’m hoping there won’t be toxicity.

Both trials are going to be big. HELIOS-B is going to be 600 patients, but the newer CARDIO-TTRansform trial involves a second-generation kind of inotersen-like compound. It’s going to be 750 patients. And I’d be remiss in not mentioning the ATTRibute cardiomyopathy trial, which we are also participating in with AG10, which is a stabilizer that works a little bit differently than tafamidis, but it is quite potent with excellent phase 2 and phase 2 extension data. That’s ongoing, and the goal is to get to 500 patients. So, for a quote-unquote “rare disease,” our trials are starting to ramp up as far as numbers. I’m looking forward to seeing, as Dr Desai said, the options will drive the price down in some of these drugs, which I think is a huge issue. If you have all these therapies and no one could afford them, it doesn’t do us any good. I like to see the competition.

John L. Berk, MD: I agree with Dr Witteles. The characterization of tafamidis as being sort of an end-goal therapy, I think it’s a major step forward. But it’s clear that the data show that people progress on therapy at high doses—and that the echocardiographic data—if you look at them, show no remodeling apart at the end of 2 1/2 years. In contrast, the subgroup from the patisiran trial that had features of cardiomyopathy, at the end of 18 months, as Dr Witteles said, had evidence of not only functional improvement—if you believe NT-proBNP improvement by more than 30%—but also remodeling that was slow. But there was a real signal there. So essentially, half the time, we’re potentially seeing some remodeling with the TTR gene silencer, but I do not think it is in the capacity of TTR tetramer stabilization.

I’d like to give each of you a chance to make some final comments. Dr Hanna, you already started yours.

Mazen Hanna, MD: Well, I just wanted to say in addition to the patisiran substudy, the prespecified substudy looking at cardiac patients, Dr Merrill Benson at Indiana University published data on a single-center study looking at patients with ATTR [transthyretin amyloid] cardiomyopathy who received inotersen. And he had some patients up to 2 years and up to 10 patients with up to 3 years of follow-up. They did MRI studies showing an almost 10% reduction in LV [left ventricular] mass with inotersen in this small single-center study. So, again, I’m kind of dovetailing on the point that these silencers, by knocking out the offending protein, can give the chance for the body to resorb the amyloid. I just wanted to make sure to mention that inotersen cardiac study.

Akshay S. Desai, MD, MPH: No, just to build on what was said, I think 1 of the great opportunities in having approaches that target different steps in the progression of disease is the opportunity to then potentially combine therapies, which is something that might become possible. And so if we can stabilize and reduce production of the aberrant protein with silencing approaches, it’s conceivable we could get much further toward that end game that you’re talking about of stalling or even reversing disease progression in the heart. And so I think there’s a lot of opportunity here, a lot to come and to learn from the next series of randomized trials. I really am hopeful that the availability of a broader range of agents will help to drive down the cost and make them more uniformly accessible.

But, in the gap, I think the challenge to clinicians who are watching this program is really to have a high index of suspicion for cardiac amyloid in patients that they’re seeing with heart failure, particularly those with HFpEF, [heart failure with preserved ejection fraction] those with low-gradient aortic stenosis, and those with some of the physical exam features and historical features that we mentioned at the outset of this program. Because I think only by making the diagnosis are we going to find the populations that stand to benefit from these therapies.

Ronald Witteles, MD: So, it’s nothing less than incredible to think about where the field of cardiac amyloidosis is today versus say, a dozen years ago. A dozen years ago, transthyretin amyloidosis was almost an afterthought. There was certainly no effective treatments available for it, and it was thought to be very rare. AL [light-chain] amyloidosis was largely a death sentence. There were poor chemotherapy options and the majority of patients would quickly succumb to the illness. Where are we a dozen years later?

Well, for AL amyloidosis, we have far more effective therapies such that now it’s really the rare patients who can’t get pretty good or great control of their light chains. We can most of the time, and the survival—we talked earlier about prognosis and the disease. The biggest difference in what prognosis model you use is when it was published. Because in the more recent models, patients do way better, not because of any difference of the model, it’s just that the therapies have gotten so much better.

And as for transthyretin amyloidosis, it’s just a different world. Now most patients can get diagnosed noninvasively. Now we know that it’s actually a downright common condition (particularly the wild-type form in an older population), and we just talked about all of the exceedingly promising treatments. We now have 3 FDA-approved treatments for transthyretin amyloidosis, 1 for cardiomyopathy, 2 for polyneuropathy, and many reasons to be hopeful that it’s only going to be getting better with more options in the coming year. So it’s a very exciting time for the field.

John L. Berk, MD: Dr Witteles, Dr Hanna, Dr Desai, I want to thank you very much. This has been a really enjoyable session. I think all viewers will recognize your true expertise, and it was a pleasure speaking with you all. Thank you very much. 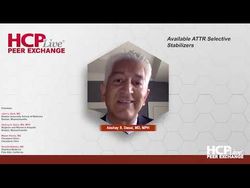