Nirmish Shah, MD: I was encouraged and interested in seeing the data that Elliott Vichinsky, MD, presented at the ASH [the American Society of Hematology annual meeting] this year, because we had, up till now, just the accelerated approval data at 24 weeks from the HOPE trial looking at the use of voxelotor in sickle cell disease, a multicenter, randomized, placebo-controlled trial, 1:1:1. The approved dose of voxelotor of 1500 mg showed 51% of patients had an improvement in their hemoglobin by 1 g/dL. That was the threshold.

The follow-up that Dr Vichinsky showed was at 72 weeks. One point that has been discussed and emphasized is what happens to VOCs [vaso-occlusive crises]. I have to take this back to the inclusion criteria for the HOPE trial itself. You saw that patients with a VOC event rate of 1 to 10 in the past year were patients included in this trial, and 40% of the patients in the trial only had 1 VOC, so it really was not powered to show a benefit.

What we see in an early 24-week trial, it was an accelerated approval because we saw this benefit. But we want to make sure it holds true, so we want to make sure that out to 72 weeks we continue to see that the hemoglobin maintains above 1 g/dL, and that for sure happened. It was interesting to see that Dr Vichinsky presented that just about 90% of the patients met the 1 g/dL threshold at least once in that 72-week period. We know that with patients with sickle cell disease, the hemoglobin goes up and down over time. That is very well expected and described. So, it’s nice to see that 90% of the patients reached that 1 g/dL at least once in that period. The difference for the pain, VOC in particular, is to look at those hemoglobin levels over a longer period. Again, when we looked at it at 24 weeks, it was just an early sign to see with a few patients that far out. We want to continue to see that kind of benefit even further, and that’s what the 72-week study did. That’s why it was nice to see more of the same benefit as we look at those data further out.

We saw that patients had, on average, an increase in hemoglobin of about 1.1 g/dL or so at 24 weeks. Again, that was what got the accelerated approval. You want to make sure that, in those patients who were included in this trial, at 72 weeks, did that hemoglobin value continue to hold true? And it did. What you saw at 72 weeks was that the hemoglobin, on average, had an increase of 1 g/dL from what it was at baseline. On average, the placebo arm didn’t really change at all, which is what you would expect in the placebo arm. I think that’s the takeaway from the additional abstract presentation—it’s more reassurance that the data that we had out of the 24-week HOPE trial, are holding true further out. 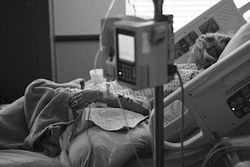