Advances in the Management of Peripheral Arterial Disease - Episode 17

Transcript: Deepak L. Bhatt, MD, MPH: Marc, it’s your chance to re-present the results. Tell our audience exactly what you found in this landmark study.

Marc P. Bonaca, MD, MPH: Thank you, Deepak. Manesh did a great job of describing the study, so I won’t revisit the design. I’ll just make the point that he made, that this really was quite a distinct population from COMPASS. Very few patients had coronary disease and prior MI [myocardial infarction]. It was quite pragmatic in terms of being on top of standard of care. That’s the first observation for the study. For those hard outcomes of the limb, heart, and brain that Manesh outlined, in spite of standard of care—aspirin or clopidogrel in more than half of patients, statins in 80%, as well as ACE inhibitors and ARBs—the event rate was 20% at 3 years. That means 1 of 5 had at least 1 of those events and most had recurrent events, so the number of recurrent events was very high.

The event rate was very high, and the addition of rivaroxaban reduced that risk significantly. The benefit was apparent as early as 3 months. It was statistically significant at 6 months. At 3 years there was a 15% relevant risk reduction. It was statistically significant with a 2.6% absolute risk reduction, or a number needed to treat of 39, for the overall population. That was a very clearly positive trial with benefit early and continued over time. It was consistent among the subgroups we investigated. We can talk a little more about those, including those patients with critical limb ischemia whom Matt had talked about, whether patients were treated with endovascular or surgical intervention. This included patients across a broad scope of secondary outcomes, including unplanned index limb revascularization, which is an important outcome for this population.

This was not free of charge, if you will. You already alluded to the fact that any antithrombotic strategy increases bleeding, and the same was seen here too. TIMI [thrombolysis in myocardial infarction] major bleeding was increased. Rates were higher with rivaroxaban. But the hazard ratio was 1.43, and the absolute risk increase was about 0.25% per year. There was no trend for harm for ICH [intracerebral hemorrhage] or fatal hemorrhage. Of course, the absolute risks for bleeding depend on the scale that you use. For the ISTH-SSC Bleeding Assessment Tool, it was on the order of about 0.5% per year.

Deepak L. Bhatt, MD, MPH: About half the patients were on clopidogrel, and the results were really quite concordant there. Matt, what was your impression of the results of VOYAGER PAD? Will it change your own practice or not?

Matthew T. Menard, MD: It will, Deepak. It’s very encouraging to see. This is really a different trial from COMPASS. This is directed to the exact question I want to know the answer to on a daily basis, in terms of those cases that I intervene on. Over the years, we’ve had very few data to go on. Do we use Coumadin [warfarin] in a high-risk bypass graft? Do we use some of the NOAC [novel oral anticoagulant] or newer agents as they’ve come on to the market?

This very focused question produced very encouraging results, and we’ll have to see how it plays out to Mike’s point, which is an excellent one. Every single patient is a little different, and that’s our challenge ahead: to really tailor the therapy. But broadly speaking, the bleeding risk appears to be acceptable for the most part. The benefit is really significant across the board. I was already creeping toward using this therapy in more of my patients based on COMPASS. This will only reinforce some of those trends.

Deepak L. Bhatt, MD, MPH: That’s really terrific insight. Mike, how does this trial fit in to the larger universe of antithrombotic trials?

C. Michael Gibson, MS, MD: It provides amazing consistency to everything we’ve learned with respect to other vascular beds. I was struck by the positive findings, but I was also very struck by the free lunch we got in this trial, where these people are so high risk that we were able to reduce the efficacy end point. But it was very nice to see that TIMI major bleeding all the way out through several years did not achieve statistical significance. The trend was numerically higher, but this is 1 of the first trials where we’re able to see a clear win in efficacy with a very small number needed to treat and without paying the penalty on the number needed to harm. That was something that stuck out with this trial.

Advances in the Management of Peripheral Arterial Disease 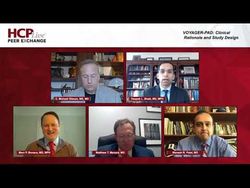