Expert Perspectives on the Management of Plaque Psoriasis - Episode 12

Access to Medication for Plaque Psoriasis and Impact of Biosimilars

Alexa Hetzel, MS, PA-C: Some insurances now are not applying those co-pay cards to their deductibles. If patients reach a maximum deductible or they don’t reach their maximum deductible, so once the co-pay card runs out at $15,000 or $25,000, then they’re responsible for their doses. That’s a new thing that I’ve noticed in the past 6 months of patients. One patient was on Taltz, and he says, “I can’t afford $3500 once a month for my shot.” That was never an issue until he changed insurances. That’s a big thing that I’ve noticed with my psoriasis patients on biologics too.

Jerry Bagel, MD, MS: What do you think about biosimilars, if and when they come out? How they will be applied to us?

Alexa Hetzel, MS, PA-C: If they’re effective and it makes it cheaper for a patient, then that’s OK. It’s similar to tretinoin and retinol. If they’re not effective and they just want us to use a cheap option because insurance doesn’t want to pay for it, then I’m not OK with that.

Jerry Bagel, MD, MS: From what I’ve seen, the efficacy is comparable. I don’t mind that much on a bio-naive person if they say you must start with this, but I would hate to see it if you’re already on something and they make you switch. That’s the problem I’m worried about. There are some laws against it like you can’t do that in cancer where you’re on a medication and you’re doing well, and you can’t switch a biosimilar in there. I would hope it was the same. 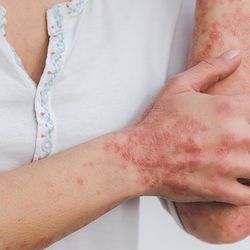