Michael A. Klufas, MD, reviews the design and key findings from clinical trials for faricimab.

Carl D. Regillo, MD, FACS: Mike, can you tell us about the clinical trials that led to the approval of faricimab, now FDA approved for the treatment of both diabetic macular edema [DME] and neovascular age-related macular degeneration [AMD]?

Michael A. Klufas, MD: If we start with neovascular AMD trials, these are LUCERNE [NCT03823300] and TENAYA [NCT03823287]. All patients were treatment naïve and were randomized after loading periods to either get aflibercept every 8 weeks or faricimab at 8, 12, or 16 weeks. At the primary end point, faricimab patients did not have inferior visual gains to aflibercept, which was great. The durability is more interesting. About 70% to 80% of patients were able to achieve dosing every 12 to 16 weeks and if you look at the ones who were able to get 16-week dosing it was about 45% at year one in the neovascular AMD trial and safety was on par with aflibercept. Importantly, there were no cases of occlusive retinal vasculitis in detailed review of those studies as well.

Moving on to YOSEMITE [NCT03622580] and RHINE [NCT03622593], these were the trials for DME. In these trials, about 25% of patients had previously received anti-VEGF treatment, so not all the patients were treatment naïve, which can be helpful when initiating this treatment. Patients were randomized to 3 groups to keep it simple after a loading period. They either had aflibercept monthly followed by every 8 weeks of aflibercept. Similarly, they had faricimab for either 4 to 6 doses monthly and they were extended to variable periods of every 4, 8, 12, or 16 weeks, and again faricimab was shown to be noninferior in terms of visual gains to 8-week aflibercept. Again, we saw good and improved durability here with about 80% of patients achieving 12 or 16 weeks’ dosing and if you went down to the 16-week dosing arm they were about 60% or 65% to achieve that on year two as the trial went on. There were similar safety signals compared to aflibercept and no cases of occlusive retinal vasculitis in this study as well.

There were thousands of patients who can have great confidence in the safety and efficacy of this new compound. In terms of switching, our existing patients don’t have great data based on LUCERNE and TENAYA because there weren’t patients who were switched from different compounds. For the DME trials we did have some patients who were previously treated, so for some of those patients you might consider switching. You can potentially apply that data to those as well.

Carl D. Regillo, MD, FACS: These were big studies. Each of the 2 pivotal trials met its primary end point showing that faricimab worked as well in terms of visual acuity gains as aflibercept and added value, though there is the potential for greater duration of action. I have to say based on what’s been published our current therapeutics, anti-VEGFs, ranibizumab, bevacizumab, aflibercept give us more of a 4-week to 12-week range of durability averaging about 8 weeks. Here we are seeing this shift toward much greater durability and yet with the same vision gains, same degree of drying, maybe even greater drying in DME and that’s another little potential bonus for some of our patients, and with comparable safety. It’s a step forward. There is added value here, is there not?

Michael A. Klufas, MD: Yes. Individuals will be critical of the study design in that aflibercept was not able to be dosed every 12 or 16 weeks. However, when I look at the DME data, the aflibercept patients who were dosed every 8 weeks vs faricimab even 12 or 16 weeks, there was more drying in the DME trials. We will see how it works in the real world if it is durable, if it is a better drying agent, but there are some early data that suggest it may be. 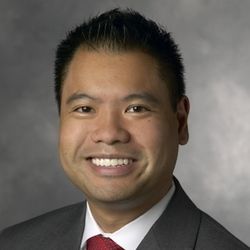 The Role of Faricimab in Treatment of AMD, DME
x