Role of TNF-alpha Inhibitors in PsA

Ana-Maria Orbai, MD, MHS, comments on the safety and efficacy of TNF-alpha inhibitors for the management of psoriatic arthritis and Anthony M. Turkiewicz, MD, reviews the phase 3 FUTURE trials.

Anthony M. Turkiewicz, MD: Ana-Maria, focus a bit on the grandfather of the biologics, the tumor necrosis factor [TNF]-alpha inhibitors, specifically looking at efficacy and safety, and identifying the perfect patient for this kind of therapy. Again, it’s not always an easy answer, but that optimal timing of when to initiate these therapies. Can you give us your thoughts on that, please?

Ana-Maria Orbai, MD, MHS: Yes. We’re all used to TNF inhibitors. As we look at our diseases, inflammatory arthritis, the arthritis center, this is our common pathway. It can go wrong, if you’re thinking rheumatoid arthritis, psoriatic arthritis. But we’re better than that now, and we know so much more about psoriatic disease that sometimes I’m asking myself whether we’ve got this the other way around…. I think maybe we’ve got it backward and we should start with the more disease-specific therapies like the IL-17 [interleukin-17] inhibitors, IL-23 inhibitors. If the disease becomes refractory to that, as I would imagine most commonly because of arthritis, then we could try TNF inhibitors or use them. Some of this strategy pays off when we cycle biologics, when someone fails, most commonly a TNF, we change the mechanism of action and we go back to a TNF, and generally this strategy works. I don’t think that we have to start with a TNF inhibitor just because historically that’s what we’ve been doing and it’s how we learned the science.

In terms of efficacy, we’re all familiar with the ACR20/50/70 [American College of Rheumatology criteria] responses. We know 60, 40, 20, trials were designed for that, and these are the results we’ve seen with most of these drugs. They’re reliable drugs that are going to help hopefully a majority of patients. It’s 50/50, but then we can change the mechanism. We know that for dermatologists there’s a clearer differentiation between the specific TNF inhibitors depending on the efficacy on the skin, with adalimumab and infliximab more efficacious for the skin, and then we use more etanercept for the joints. I always have the comorbidities in mind; for inflammatory bowel disease, uveitis, we have selection there as well.

With the newer trials, and I’m thinking specifically of the SEAM-PsA trial, now we know that they also legitimately work for the disease-specific manifestations like enthesitis, dactylitis.We even have MDA [minimal disease activity] outcomes with etanercept from the SEAM-PsA trial, which were at the same level with newer drugs. About 35% of people in the trial achieved that. It’s a solid treatment option in psoriatic arthritis. We have to refine the order and our strategy with our patients.

Anthony M. Turkiewicz, MD: That’s good. It’s interesting what you said, and I bring this up too. How much did some of the early TNFs benefit from these newest agent studies that have comparator arms or head to head, all of a sudden we know, hey, enthesitis and dactylitis, the way it was meant to be looked at, as opposed to 2003, where it’s kind of this gestalt. It’s fascinating to see how these newer outcomes have been applied to the good old TNFs, and then we see that some of them performed pretty well. It’s a benefit they’ve gotten. One point that I was going to ask, and again this may be getting into the weeds a bit and not discounting any particular one, but when it comes to TNFs, monoclonal vs the fusion receptor and thinking about comorbidities, does that get into your brain a bit when you think about, whether it’s GI [gastrointestinal], potentially uveitis involvement? What are your thoughts, anyone for that matter? Do you all care about that or is it no big deal? In other words, etanercept vs monoclonal.

Ana-Maria Orbai, MD, MHS: We’re getting into comorbidities and coexisting inflammatory conditions. That’s going to be an option for uveitis or for inflammatory bowel disease. It’s helpful there. To be honest, I don’t know why that is. If any of you have a better explanation, I’d love to learn from you.

Leonard H. Calabrese, DO: We’ve been thinking about it for 20 years.

Leonard H. Calabrese, DO: But I agree with those comments.

Anthony M. Turkiewicz, MD: There was a callout on secukinumab, one of the 2 IL-17A inhibitors approved for psoriatic arthritis management, they had, there is all this nomenclature now, these were the FUTURE trials. They had a FUTURE 1, a FUTURE 2, and a FUTURE 5. FUTURE 2 and FUTURE 5 are the pivotal phase 3 trials. FUTURE 1 had used an IV [intravenous] formulation as well. But the FUTURE 2 and FUTURE 5; so, it’s similar in study designs for secukinumab.. FUTURE 2 had just under 300 patients, and they had the Cosentyx or secukinumab 150-mg arm, 300-mg arm, and placebo. Novartis, in their studies, they had a mixed population. In FUTURE 2 and in FUTURE 5 you had a blend, so there’s about 65% of those just under 300 patients in FUTURE 2 who been TNF naïve, and then the remainder had been exposed to a TNF.

Primary outcome for FUTURE 2 was ACR20 at week 24. But it was the ACR50 and ACR70s, a complete resolution of dactylitis and enthesitis, and the functional manifestations that were of most interest, and again statistically significant compared to placebo. There’s not a huge difference between the 150- and 300-mg arms. As of last April, the publication in 2020 showed the 5-year data on the FUTURE 2, and you had a fair amount of those patients staying in the study, which patients doing well obviously stay in the study. Again, their ACR scores were sustained, same thing with complete resolution of dactylitis and enthesitis.

FUTURE 5 was secukinumab’s larger psoriatic arthritis trial. They had just under 1000 patients in that trial. Again, the arms were similar, but they had a no-load arm too. They had a 150-mg, a 300-mg with load, a nonload 150-mg arm, and then a placebo. Then they followed these patients out for the typical ACR20 at week 24. And then they had 2-year data. What came out of that besides the statistically significant improvement in the ACR scores, complete resolution of dactylitis and enthesitis, they were able to show inhibition of radiographic progression, a slight dose-dependent improvement on the 300-mg arm. Nonetheless, that’s where secukinumab was able to achieve the inhibition of radiographic progression. That’s a brief overview on the secukinumab FUTURE trials. 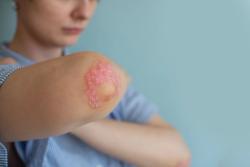 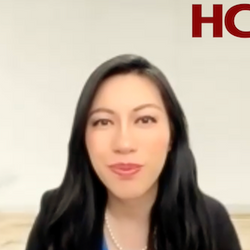