Dr. Pandya shares his conversations with patients about re-pigmentation of segmental and non-segmental vitiligo and treatment options that exist.

Amit Pandya, MD: I explain to the patients with segmental vitiligo that they represent only 15% of vitiligo and that the onset of their vitiligo is different in terms of the pathogenesis than people with non-segmental vitiligo. I explain to them that when they were being formed as an embryo in their mother's womb, they had what I call a mother melanocyte, which led to all the baby melanocytes, just for one side of, for example, this area. And another mother melanocyte that all the millions of baby melanocytes, this one, and then another one for this one. Therefore there is segmental vitiligo stops in the middle. And that one mother melanocyte for that area was abnormal from the time they were born and was predestined to cause the death of all those hundreds and thousands and millions of baby melanocytes only in that area. And when you explain it to them that way, they start nodding their head. Now they understand why it's only on half of their body and not in other areas. And I tell them that you have a 90% chance of not getting it on both hands, both feet, both knees like you've seen people in the grocery store with vitiligo that you are afraid you're going to get. You have a 90% chance that it's just going to stay in that location. It takes about 2 to 3 years for it to do its thing, and then it stops, and it stays that way for life. And we can aggregate that. We can reduce that with treatment. Those are important things we need to tell people with segmental vitiligo. And then in terms of treatment, I say the good news is it's probably not going to spread. You've got about a 10% chance you can get mixed vitiligo with new lesions, but 90% chance it'll stay there. But the bad news is this is a tough vitiligo to treat. It kills, not only every melanocyte in the skin, but it causes the death of the melanocytes at your hair reservoirs. And if you do a dermoscopy, you'll see black hairs at the edges, but you won't see them in the middle. You'll see white hairs in the middle. And those are the tough ones. I tell them, I said, with phototherapy, we can get your segmental vitiligo somewhat better, but there will likely be an area that will not completely repigment for which we may need to do melanocyte transplant or skin grafting to repigment that area. But that'll be down the line. I want to treat you for six to 12 months first to see how much I can reduce your segmental vitiligo, then we'll have that discussion about transplants.

Brett King, MD, PhD: That's helpful. I think providersneed to understand that the treatment of these 2 types of vitiligo really at the start are the same but at some point, they're different. And ultimately, we're going to – for that second part, we're going to need to refer patients to providers experts who are doing these other procedures. How many folks around the US do melanocyte transplant procedures?

Amit Pandya, MD: There are 2 types of transplants. There's the tissue transplant in which one takes very tiny pieces of skin. What we call mini punch transplants. They are between one and 1.5 ml in diameter, and you take those from the hip and you insert them into little holes you create in the area of vitiligo. And there's only about 5 people in America who do that. And then there are blister transplants in which you make blisters on the patient's hips or buttocks, and then you laser off the vitiligo skin and you apply those blisters to the areas of vitiligo. That's also called a tissue transplant. Again, only 3 or 4 places. And then there's the one that you mentioned, which is the melanocyte transplant, where you take skin from the hip or buttock. You incubate it with trypsin, you then develop a suspension of keratinocytes and melanocytes. You laser off the area of vitiligo and you put these cells on drop by drop and cover it with the collagen dressing. That is the most technically difficult one to do. Again, there's only about 4 or 5 centers in America that are doing that, but it is a good solution for segmental vitiligo, and probably the best one, because you can have a donor to recipient ratio of one to five, to 1 to 10, and you can treat a larger area and you don't have the scarring of mini punch grafting in that location. 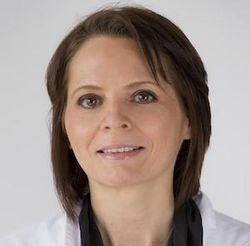